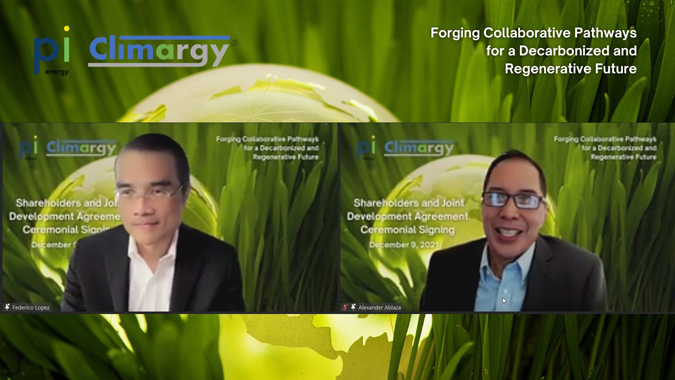 The two companies aim to cut the electricity use of their client companies by one terawatt-hour — saving P7.5 billion in power costs — through year 2040.

The EE&C projects will help “remove massive amounts of excess, heat-trapping carbon dioxide (CO2) from the atmosphere,” the Lopez-led PI Energy said in a statement released over the weekend.

At the signing ceremony on Dec. 9, PI Energy Chairman Federico R. Lopez said that energy efficiency is fairly new in the region, so the partnership will be a “trailblazer” in the support and financing of energy conservation.

“Once in full play, it brings us closer to that reimagined and redesigned world that we often speak of with all the attendant benefits to businesses, consumers, energy producers, the economy, and the environment,” he added.

Climargy President Alexander D. Ablaza described the deal as a “game changer” in the EE&C market.

“It is still quite rare that energy developers team up to execute a business partnership dedicated to EE&C project assets across multiple energy service companies and multiple end users,” Mr. Ablaza said.

President Rodrigo R. Duterte signed Republic Act 1128 or the Energy Efficiency and Conservation Act in 2019, after almost three decades in Congress. The goal was to systematize energy efficiency and conservation measures by regulating energy-efficient technologies.

The law provides tax incentives to companies with EE&C initiatives in their operations.

On May 11, the Department of Energy issued the guidelines for submitting energy efficiency projects for fiscal incentives. The projects must cost at least P10 million and meet a minimum 15% project boundary or the absolute value of energy savings.

Meet the members of the Board of Directors of ClimargyⓇ who have over 150 years in aggregate experience in the energy, industrial investments, and legal practice.

Does your building or plant have ageing, high-duty electromechanical equipment that continue to increase your energy and maintenance costs? Describe them to us.

Energy efficiency and decarbonization opportunities exist wherever energy is consumed. Most facilities are not optimized, and assets degrade as they age and operating conditions evolve. All this can be remedied, but it usually involves a combination of operating and capital expenditures.

Given the specialized nature of such investments - particularly in energy-hungry markets in Asia, ClimargyⓇ was established to develop fully-financed energy management upgrades for commercial and industrial (C&I) clients in priority growth markets in the region.